Benefits and Uses of CBD 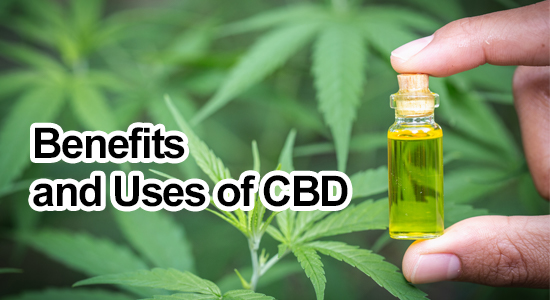 Cannabidiol is a popular natural remedy used for many common ailments. Here are some health benefits of CBD oil that are backed by scientific evidence.

Marijuana has been used to treat pain as far back as 2900 B.C. More recently, scientists have discovered that certain components of marijuana, including CBD, are responsible for its pain-relieving effects.

Several human studies have found that a combination of CBD and THC is effective in treating pain related to multiple sclerosis and arthritis.

2. Could Reduce Anxiety and Depression

Anxiety and depression are common mental health disorders that can have devastating impacts on health and well-being.According to the World Health Organization, depression is the single largest contributor to disability worldwide, while anxiety disorders are ranked sixth.CBD oil has shown promise as a treatment for both depression and anxiety, leading many who live with these disorders to become interested in this natural approach.

In one Brazilian study, 57 men received either oral CBD or a placebo 90 minutes before they underwent a simulated public speaking test. The researchers found that a 300-mg dose of CBD was the most effective at significantly reducing anxiety during the test.CBD oil has even been used to safely treat insomnia and anxiety in children with post-traumatic stress disorder.CBD has also shown antidepressant-like effects in several animal studies.

Some test-tube and animal studies have even shown that CBD may have anticancer properties. For example, one test-tube study found that concentrated CBD induced cell death in human breast cancer cells.

Though CBD has been shown to help reduce symptoms related to cancer and cancer treatment, and may even have cancer-fighting properties, more research is needed to assess its efficacy and safety.

Acne is a common skin condition that affects more than 9% of the population.

CBD may have beneficial effects on acne due to its anti-inflammatory qualities and its ability to control the overproduction of sebum from the sebaceous glands.

Though research is limited at this time, CBD has been shown to ease symptoms related to epilepsy and Parkinson’s disease. CBD was also shown to reduce the progression of Alzheimer’s disease in test-tube and animal studies.

Recent research has linked CBD with several benefits for the heart and circulatory system, including the ability to lower high blood pressure.
High blood pressure is linked to higher risks of a number of health conditions, including stroke, heart attack and metabolic syndrome.
Several animal studies have demonstrated that CBD may help reduce the inflammation and cell death associated with heart disease due to its powerful antioxidant and stress-reducing properties.
Though more human studies are needed, CBD may benefit heart health in several ways, including by reducing blood pressure and preventing heart damage.

Though more studies are needed, CBD is thought to provide the following health benefits:

Antipsychotic effects: Studies suggest that CBD may help people with schizophrenia and other mental disorders by reducing psychotic symptoms.

Anti-tumor effects: In test-tube and animal studies, CBD has demonstrated anti-tumor effects. In animals, it has been shown to prevent the spread of breast, prostate, brain, colon and lung cancer.

Diabetes prevention: In diabetic mice, treatment with CBD reduced the incidence of diabetes by 56% and significantly reduced inflammation